What is “American” fashion? I don’t mean fashion made in America

At New York Fashion Week, a Reflection on American Style

What is “American” fashion? I don’t mean fashion made in America — that much is obvious (though considering most high fashion in America is manufactured in Italy, that’s an interesting point for discussion too). But ideologically, what does it constitute? What makes a collection, or a designer, especially “American?” To a set of jet-lagged eyes, that seemed to be the question that occupied New York designers in their spring/summer 2017 collections. 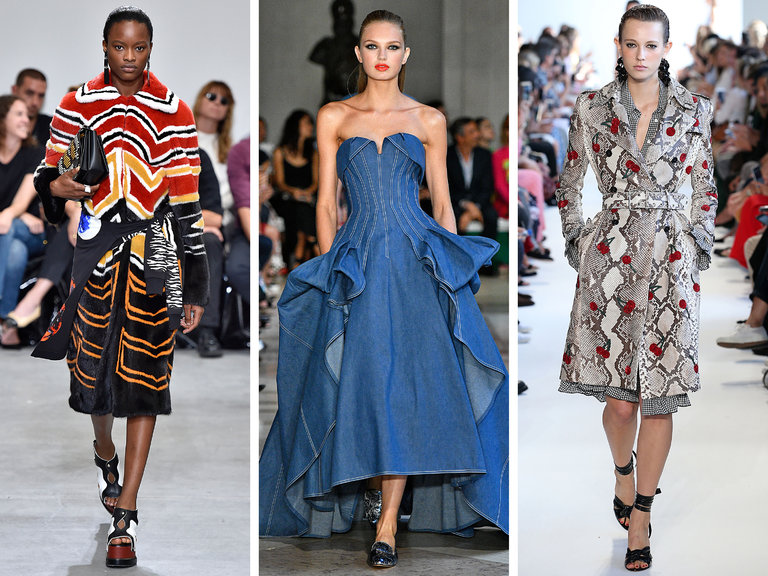 Maybe it’s because this is an election year, for an election that could redefine perceptions of America, both at home and abroad. Look at how the currently unravelling saga of “Brexit” has transformed and polarized opinion of the United Kingdom. Is it facile to reduce Trump versus Clinton down to fashion? No, especially considering that the much-parodied emblem of the Trump campaign is a baseball cap purporting to help “Make America Great Again;” and that pretty much the entirety of New York’s designer community — Diane von Furstenberg, Marc Jacobs, Altuzarra — has banded together to create T-shirts in support of Hillary Clinton. No one’s come out for Trump quite yet — though on Wednesday night, Gucci did launch a range in their Fifth Avenue flagship store, nestled under the Trump Tower. So we got close.

Perhaps that’s what threw New York into an existential crisis: If you’re fighting to help shape America’s future, maybe it prompts you to question what “American” really means — and how it manifests in a few yards of fabric with a four-figure price tag. American fashion is, we’re so often told, commercial. It’s easy. Sportswear. It’s Claire McCardell in the ’40s, with her shirtwaist marieprom dresses and flat pumps and stretch jersey swimsuits; it’s the cleanliness of Roy Halston Frowick in the 70s (in work, if not in life); it’s Calvin Klein (although not this season, as the brand dropped off the schedule prior to the first collection by Raf Simons, due next year). It’s probably not Joseph Altuzarra’s sheer stockings and flirty, froufrou skirts, and python-embroidered cherries, with their heavy doses of 1971 Yves Saint Laurent. But that was fun enough.

American fashion is also an Oscar de la Renta ballgown, an Adolfo suit, the anarchic, perennially penniless Stephen Sprouse, the genius of Charles James. American fashion is multifaceted, complex, then and now. What was rewarding, in seeing designers grapple with nailing down its meaning, was their often unexpected conclusions. It wasn’t all jersey. Mary-Kate and Ashley Olsen’s The Row, for instance, which showed in the brand’s chic, three-story walk-up on 71st Street, featured Keds (or The Row’s expensive equivalent) and clothes in folk embroideries with chewy texture, or papery cotton like hospital gowns. If I had to cite an influence, I’d say Donna Karan, in theory if not in practice: The Row makes simple but expensive stuff designed to work in tandem with women’s lives.

Talk about dichotomies, how about walking a block to the Frick and seeing Carolina Herrera? A stone’s throw can be a world apart: She opened her collection with a denim ballgown, which sounds like the sort of thing that should be confined to a Ry Cooder-themed episode of “Say Yes to the Dress,” but actually looked great. Herrera also made ballgowns out of checkered fabric like tablecloths, and big fat Yankee bandbox stripes. And brocade, of course. Herrera’s is a distinct subset of American style: It’s the Oscar de la Renta world (which had a weak, rudderless season lead by the design team, but promises better next when Monse’s Fernando Garcia and Laura Kim fill the vacant creative director position). But back to Herrera: Her ballgowns and slender evening dresses fit in perfectly in her spiritual and physical home of the Upper East Side. There were even a few shirts with exaggerated cuffs, the sort of stuff Herrera herself wears all the time, and looks so handsome in. This is American style too — uptown.

I asked Jack McCollough and Lazaro Hernandez of Proenza Schouler if they felt like they were downtown designers, and they pulled a face. But they’re hardly uptown. “Midtown?” suggested McCollough, with a heavy dose of sarcasm. Maybe just New York, which is the territory plenty of designers wish to occupy, but few straddle as effectively as Proenza Schouler. Case in point: They showed their fall/winter 2015 collection in the Marcel Breuer-designed former Whitney Museum of Art on Madison Avenue; fall/winter 2016 was in the new downtown Whitney. And for spring, their clothes mixed uptown and downtown: There was something fundamentally American about a mink coat cut with all the luxury of a bathrobe (a good thing) and with a print T-shirt wrapped around the waist (a better thing). It’s an outfit you felt you’d never seen before, that did something new and different with luxury. It brought that fur down to earth, and made it feel real, which is an idea so many designers are talking about across the world, but one that feels distinctly American.Hernandez and McCollough are clever designers; they like referencing clever things. American artists are a particular fetish: This collection’s collaged prints of photographs — of McCollough’s clenched fist alongside randomly Googled images of Greek statues (where they are going for a post-fashion week holiday) — reminded me of the work of John Baldessari. So did the brilliant colors, predominantly Yves Klein blue and Warholian Campbell’s Soup red. Proenza Schouler was showing in a gallery again, so maybe those associations are inevitable.They’re also clever because this collection felt decidedly, desirably commercial. Is that a dirty word? Not in America. The overriding impression of fashion week was how well American designers can do that, without it (necessarily) feeling lame. Lots of it did, of course. But I couldn’t help but be wowed by Ralph Lauren, quietly nailing that See Now, Buy Now thing everyone’s prattling on about. You watched the show, outside his boutique, then streamed in to see the clothes in store. And, perhaps, buy. His collection was Western-inspired, and he’s making out like a bandit. How American is that?