Nude selfies, cold shoulders and the Hadids: the year in fashion

The most influential outfit of the year featured no clothes at all. When Kim Kardashian posted a hotel-bathroom nude selfie on Instagram back in March, she kickstarted a row over how this peculiarly narcissistic form of self-expression squares with its advocate’s self-proclaimed feminism. Should you doubt the impact this image had on our fashion psyche, consider this: shopping site Lystreported a 400% rise in searches for black bandeau bikinis that would recreate the effect of the black censorship bars. Yes, censor-bar chic is a thing. At Paris fashion week, a few weeks later, Kim’s sister Kendall wore a minimalist black bandeau top that echoed Kim’s look. With it, she wore a black ribbon choker, a trend that has been worn by every female celebrity under 25 this year, and is now all over the high street. If you are a teen girl, you are so getting a Claire’s choker in your stocking. Which is odd, because a choker is as rude as jewellery gets. The meaning of the choker is, basically, nudity: see Manet’s Olympia. 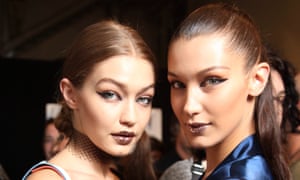 2 The most liked (better than the most beautiful)

A year is a long time in social media. I mean, an hour is a long time in social media, so where to start? But, the topline is: 2016 was the year Instagram became a competitive sport. In fashion, “winning” at Instagram is now a thing. It turns out that the whole of 2015 was the equivalent of that bit before the Wimbledon final when Andy Murray and whoever that other man was knocked balls back and forth across the net, before the umpire called time and the match actually started. If you still think Instagram is for, I dunno, drunken taxi selfies, then you need to up your game. Instagram is now LinkedIn for the beautiful people. If you don’t believe me, take a look at Selena Gomez, who has 104 million followers on Instagram and is cleaning up on the fashion pay cheque front – with a Louis Vuitton campaign under her belt, Gomez just signed a $13m (£10.2m) deal to be the face of Coach. That may not be an attainable goal for everyone. But next time you take a back-of-the-cab selfie, maybe FaceTune it at least, OK?

From Bardot tops on summer holidays to cut-out knitwear for autumn, with off-the-shoulder marieprom wedding dresses and cold-shoulder blouses in between, shoulder-exposure has been this year’s standout detail. If you ever find yourself adrift in the aforementioned space time continuum and needing to find your way back to 2016, you can reorientate yourself by following the clavicles. The cold shoulder hit the spot this year because it encapsulates our love-hate relationship with nudity: the spotlight is on skin, but the whole point of the look is that the rest of you is covered up. The perfect look for a messed-up year.

You will recall that in Back to the Future (1985), Doc explains that if Jennifer comes face to face with her older self, “the encounter could create a time paradox, the results of which could cause a chain reaction which would unravel the very fabric of the space-time continuum”. This is exactly where we are now, in fashion. In the year of the Timelapse and Boomerang video trends and of Stranger Things’ Upside Down, fashion has disrupted its own timeline with the arrival of see now buy now. See now buy now means that the status quo, whereby clothes arrived on the catwalk six months before they arrived in shops, has been hijacked. Some catwalk collections, such as Burberry’s, are available in stores hours after the show; others get looped back to a season later. (To add a layer of complexity, Christopher Bailey themed the Burberry collection around Virginia Woolf’s time-travel classic, Orlando.) For people in fashion, this is all very discombobulating, similar to when the post stopped coming at breakfast time like clockwork, and started randomly arriving mid afternoon. The upside is: you can start wearing a trend during fashion week or wait six months, and either counts as being on trend.

Fashion’s big moments are no longer the domain of fashion week and the Oscars, and as many of the key style moments of 2016 have happened in state rooms as they have on catwalks. Case in point: Tina Fey rocked Versace on the Oscars red carpet and Zayn wore bespoke Versace armoured sleeves at the Met Ball, but no one rocked Versace in 2016 like Michelle Obama did in goddess sequins at her last state dinner. Likewise, the streets of Paris and Milan were literally swarming with wannabe street-style stars doing a dressed-up pyjama look during the last fashion month, but none of them came close, for cuteness, to Prince George meeting the president in his fluffy dressing gown. From Melania Trump’s pussy-bow blouse to Theresa May’s leather trousers, this was a year when the biggest fashion news happened on the actual news.

If you had to put one piece of 2016 in a time capsule to represent this year in style, it would be Vetements sock-boots with the unicorn heel. Except it would be impossible, because those boots sold out months ago and are only available online for double their original retail price, and if you find a pair in my size I will wrestle you to the ground for them. Vetements, the cult Paris brand that turned the DHL into a style icon, has turned fashion upside down by subverting every rule of what’s haute and what’s not. After Vetements put a Justin4Ever T-shirt on their catwalk, Bieber brought out Vetements-inspired tour merchandise that became this summer’s hottest look whichever after-party you were at. What does it mean? Who can we believe, in a world where Tom Hiddleston responds to accusations that loved-up photos with Taylor Swift are staged by wearing an I ♥ TS vest in what look even more like staged loved-up photos with Taylor Swift? Reality is so last year. Snuggle up in your mermaid blanket and dream of Santa coming down the chimney with size six unicorn boots.

Do I need to spell it out? In 2016, we worshipped the Hadids. The new holy family of fashion are models Gigi (21), Bella (20) and their mother Yolanda. For the benefit of those who – bafflingly – perhaps don’t follow such things in granular details, the narrative arc of 2016 developed when Gigi, having established a power base via a strategic alliance with Kendall Jenner (scion of the Kardashian sex-tape and lip-gloss fortune) repositioned herself in the celebrity firmament alongside her sister. To consolidate the in-house brand, if you like. The scope of ambition of the Hadids can be seen in the increased visibility of Yolanda, who accompanied Gigi to the Fashion awards, because you are no one without a momager.

The skinny jean entrenched itself in power a decade ago and hung on doggedly longer than anyone would have predicted. But now a crazy new generation of denim has succeeded where more low-key new looks have failed. We had the boyfriend jean, the girlfriend jean, the skinny boyfriend jean, the Mom jean – a whole extended family of jean shapes attempted to oust the skinny, without real success. But this year, along came a whole new beast in the Frankenstein jean, as invented by Vetements, which remade jeans by chopping and patching. (Look for the distinctive mullet-stepped hem.) If you are not wearing them yet, you will be.

If Barbie is in the market for a seasonal spinoff that would sell like hot cakes at the close of 2016, it should go for Meaningful Beyoncé. Meaningful Beyoncé slayed all comers this year. At the Superbowl, she reinvented the leotard as Black Panther homage. With Lemonade, she rocked the world with a visual essay on the inner lives of black women. As living proof of the fact that a female celebrity can use her image and her beauty to say something more interesting and more genuinely empowering than “women are beautiful – like, just look at my breasts!”* Beyoncé is, to use the most overused word of 2016, an inspiration.

Such is the primacy of the Kardashian clan in popular culture that no recap of the year would be complete without them. But this year was different. It was season 12 in Keeping Up With the Kardashians, but it is best viewed as Act three of The Kardashians. The connection (via Kim’s father, Rob Kardashian) to the awful deeds behind spring’s TV hit The People v OJ Simpson felt prescient at Paris fashion week, when Kim Kardashian was held hostage in her apartment. The story that had been a diverting soap opera became genuinely horrifying. Weirdly, the most high-profile outing for any of the Kardashians in the period since was Kendall Jenner at the Victoria’s Secret show, where she won the hard-fought prize of Most Tasteless outfit on the catwalk by wearing lingerie with what appeared to be a neck-brace.

The latest Pirelli calendar, shot by Peter Lindberg, is a landmark moment. It represents fashion coming to terms with the fact that the world has moved on from an aesthetic landscape peopled only by young, slim, heavily made-up and then even more heavily Photoshopped women. The calendar features older women – Uma Thurman, Helen Mirren, Julianne Moore – and there is more knitwear than swimwear. Lindberg’s comment that the photos were “a cry for beauty today against the terror of perfection and youth” echoed the launch a week later of Reebok’s #PerfectNever campaign, which purports to question images of body perfection (while, confusingly, putting Gigi Hadid onstage in a crop top, but there you go.) This year, the No Make Up selfie was more aspirational than any amount of contouring.